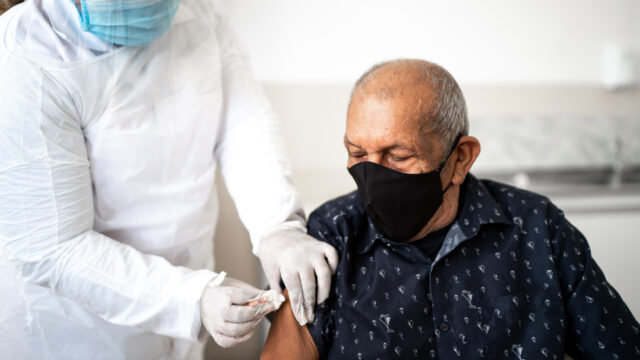 The following indicators were selected to collect information on vaccine access for individuals who are homebound within each state.

Percentage of a state’s population that is 65+

In almost every state, the population of individuals aged 65 and over is growing rapidly. These individuals have complex and challenging health needs, often compounded by multiple chronic conditions. Being able to identify the percentage of each state’s population that is considered homebound is critical to meeting their health needs. Such data on homebound individuals is not available in many states, pointing to the need for national and state attention to such data collection to inform responses to future emergencies.

The older adult population in the U.S. has borne the greatest burden of infection and death due to the SARS-CoV-2 virus. Thus, it is imperative to ensure that these individuals have been prioritized for vaccination. This state-level data reflects both the will to ensure such prioritization, as well as the willingness of older adults in these states to be vaccinated. However, it does not measure any degrees of hesitancy or other barriers to vaccinating the over 65 population.

The development and implementation of plans at the state level to provide at-home vaccinations varies greatly from state to state. Some state departments of health acted quickly—even before vaccines were available—to identify their homebound population, put together mobile teams for administering the vaccinations, and ensure appropriate reimbursement for the travel and time for home administration. Some state departments of health delegated this effort to local health departments, state contractors, and/or the aging services network.

To ensure the needs of a state’s homebound population are adequately addressed, some state departments of health created their own definitions of who could receive vaccinations at home. These definitions often use the Centers for Medicare and Medicaid Services (CMS) definition as a starting point. CMS defines homebound as “those that need the help of a caregiver or medical equipment such as a wheelchair, walker, or crutches to leave their homes, or those whose doctors believe their health could decline if they were to leave the home.” However, some states, like Washington, elected to create their own definition to ensure broader access to the vaccine, including caregivers and other family members living with a person who is considered homebound.